Kangaroos belong to the family of marsupials. When most of us think about a Kangaroo the thoughts of a large and curious animal enter our minds.

We also think about them hopping and youngsters peeking out from the pouch that is part of their unique anatomy. In Australia, this particular animal is a symbol of their land and shines throughout different aspects of their culture. 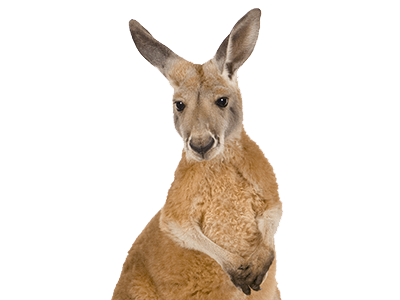 Many people are very impressed with the pouch on the females that she carries her young in. This is often the fact that people immediately think about when they are talking about Kangaroo. The photos of them peeking over the top as they ride around with her are enough to melt just about any heart.

Another element of this animal that people are excited about is hopping. It is believed this is a way for them to quickly get around but at the same time to be able to save their energy. Research shows that each Kangaroo does about the same number of hops per minute.

The distribution for Kangaroos in Australia. Some of the subspecies have been located throughout the county. These animals seem to do very well in captivity, and many zoos have them on display. In fact, they are a prime attraction for bringing lots of people to the zoo on a regular basis.

The environment that Kangaroos live in continues to change due to the efforts of humans. They do seem to be highly adaptable to such changes most of the time. Even so, the fact that their natural environment is becoming smaller makes finding food and shelter a very serious problem for many of them.

As a result that makes it very hard for it to grow back and offer future vegetation for them and other animals. In fact, many experts are amazed by the fact that the Kangaroo has been able to adapt to the dry climate of Australia.

The fact that they are able to evolve as necessary in order to survive in their surroundings is part of the reason why these animals continue to thrive in the wild. Even so, their numbers continue to drop at a rate that has made many people alarmed. Many people kill wild Kangaroos in their natural habitat as well.

They do so for a variety of reasons. They include eating their meat, for the love of hunting such an animal, and even to clear them from certain areas. It isn’t uncommon for their habitat to be turned into an area for farming or ranching. These animals have to be eliminated from the area though for those efforts to be a success.