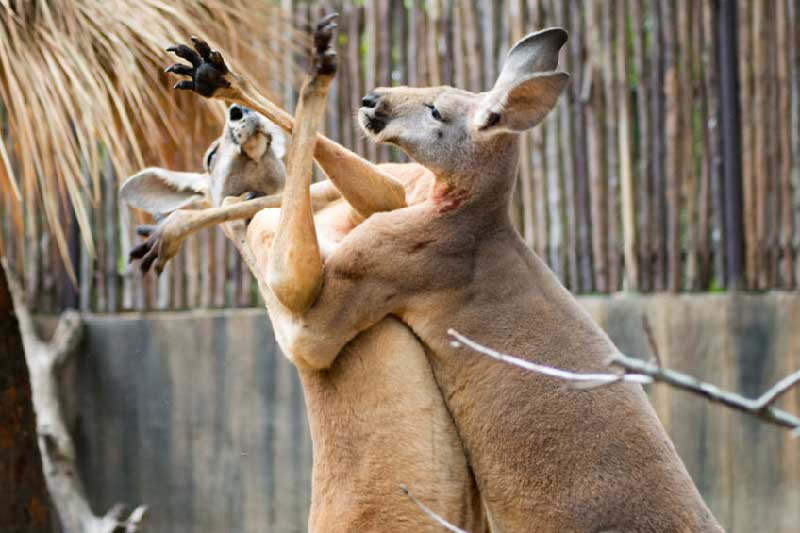 Kangaroos are large, strong, and potentially active animals at all times. They are brown and are characterized by having a small head and a long and imposing tail.

They have a bag in their belly where they carry their babies when they jump. They have large and strong hind legs as well as feet with which they can jump long distances in addition to having sharp claws that must be lethal in a confrontation with any living being.

They are herbivorous animals that feed on grass and soil roots. At first glance, kangaroos are fun and calm, but their limbs and attributes can be dangerous for anyone who comes into contact with them.

Kangaroos are extraordinary and brilliant creatures, but there are times when they cannot understand the situation in the environment around them.

They can misunderstand the actions of humans towards them, seeing it as a threat and causing this animal to defend itself with lethal blows and kicks towards its supposed aggressor.

This particular animal is indeed dangerous to everyone, only if they feel threatened or attacked. Outside of that, if there are no assaults, there will be no danger to people, since wild kangaroos flee from humans and do not have the slightest interest in them.

The same thing happens with kangaroos in captivity, especially males. These alphas are large and more likely to act aggressively against the guardians or vigilantes of the place. They can react defensively by delivering kicks and trying to grab their opponent by the neck.

It is true since there have been cases of kangaroos attacking thousands of people for no reason, unless it is about approaches to them with motives of caressing them, feeding them, catching them and even taking pictures with them.

If you come across one of these creatures, it is crucial to prevent by covering and protecting your face and neck.

They are considered lethal animals from which you should stay away if you find one of them. Even if you try to approach them to give them food, they can understand it as a threat, and they respond to it with strong attacks.

It is recommended that you avoid feeding them as it is one of the biggest causes of kangaroo accidents worldwide. These animals do not interpret the intentions of humans, so they consider this act as a danger. In a way, it intimidates them, but in the end, they respond with attacks.

They are also very dangerous on traffic routes. They can be compared to deer when they suddenly appear on the road.

When they do this, they tend to surprise drivers by making them change direction. But in many situations, they cause car accidents and severe injuries to passengers, in extreme cases, death.

It is not convenient to provoke this animal at all. Kangaroos can run at a speed of 70 km/h, and when attacking, it leans on its tail and kicks with its two large legs (they are hard and have long, sharp claws).

These animals are generally very docile. When they are not disturbed, they do not act fiercely and move away from people.

It is in their nature like that of any other animal to move away or jump several meters away from people by instinct. As long as the kangaroos do not feel a threat or attack towards them, you can be free of any danger.