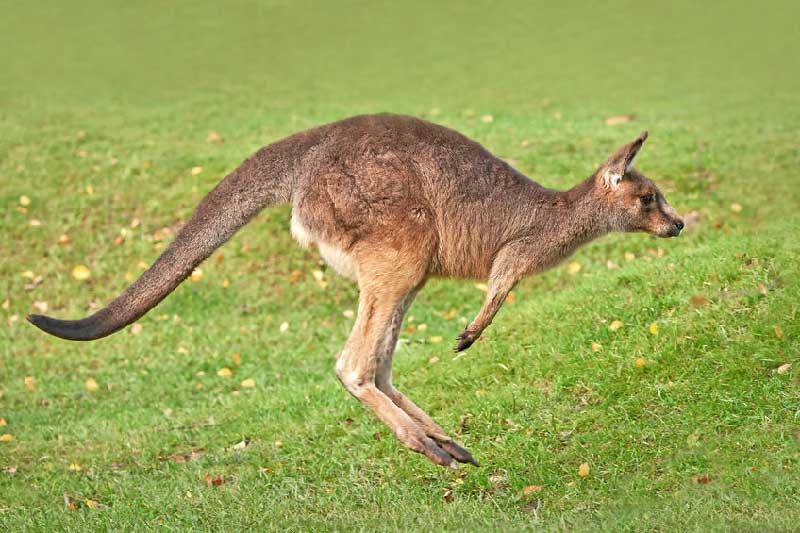 There are many fast animals in the world of different breeds, sizes, and categories. Kangaroos lead a line of high jumpers, outnumbering quick and skillful animals.

It has come to outperform species such as Australian hares, coyotes, horses, and common antelopes. But it pairs with Thomson’s gazelles and pronghorn.

If we talk about the animals that can beat the kangaroo in speed are the Carolinas squirrels (gray squirrels), the Siberian tigers, and the cheetah. The latter exceeds the speed barrier, with several marks traveled by 115 km per hour.

Kangaroos can compete against a car and are capable of being within reach of these or even more. Of course, these only jump to the side of the vehicle, trying to match it, but it can be dangerous since a traffic accident may occur if they meet a kangaroo that jumps quickly.

How Fast Can a Kangaroo Run?

Kangaroos are very athletic animals. In their daily life, they maintain a routine of jumps and light jogs that they are used to doing.

Professionals have studied these marsupials for many years, with the sole purpose of making people know about these animals.

Kangaroos don’t run, they jump. These animals do not put one foot in front of the other as we do. Their legs are short, and their feet are large, so it is natural for them to jump short and long distances depending on how they want it.

If they jump for several periods, they save energy to keep doing it for a longer time, that is, while a kangaroo jumps faster, it will not consume as much energy and will tireless.

It is stipulated that the kangaroo is the only large animal that uses the jumps it produces with its strong and large legs as a means of locomotion.

The standard speed produced by the jumps of these animals is between 21 km and 26 km per hour (13 and 16 mph).

When they start their tour, they may be able to reach 25 feet long at speeds of 16 mph and 44 mph for short distances. This is the only animal that can make the longest jumps in the world.

It is also considered that kangaroos can travel 50 km per hour. All this thanks to the help provided by its hind legs. As this animal begins to jump with its jumps, the previous one it made can serve as an impulse for the next one.

In addition, the tail of the marsupial is hard and very resistant. It helps it balance so that it can take longer jumps.

The lengths of one of its jumps are three meters high and a maximum of twelve meters long.

Kangaroos are recognized in the jumping category as the best jumpers in the world. They can spend more than 30 minutes jumping as they have excellent resistance and know how to manage their energy well.