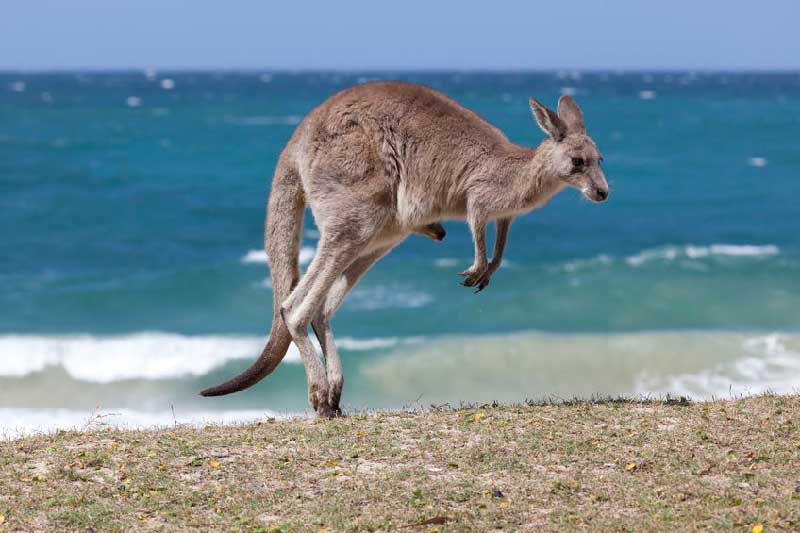 Kangaroos are considered the best jumping animals in the world. Its speed and power in jumps are due to the incredible and powerful hind legs.

The legs and paws of this mammal are not only designed to hit, but it is thanks to them that kangaroos can jump to great heights and at different times and speeds if they wish.

We consider kangaroos to be excellent jumpers due to their physical characteristics:

This animal is the only one capable of moving through jumps. Its anatomy and characteristics make it a powerful animal when moving.

How High Can Kangaroos Jump?

Regarding the height of their jumps, they are performed at a capacity of more than 3 meters of elevation, that is, around speeds close to 50 km / h. When kangaroos jump, it is a complete spectacle for people who have been able to observe them in their natural habitat.

How Far Can Kangaroos Jump?

Kangaroos achieve their jumps approximately at a distance equivalent to 2 meters; however, when this animal feels in danger or threatened by a beast or a human being, it tends to make longer jumps, where a single jump may be able to cover 9 meters in length.

What Is The Longest Recorded Jump By A Kangaroo?

Acording to the Guinness World Records, the longest jump by a kangaroo was 12.8 m (42 ft). This expectacular jump occured during a chase in New South Wales, Australia in January 1951, when a female red kangaroo made a series of leaps including one measuring 12.8 meters (42 feet).

In summary, the kangaroo can reach speeds of over 35 miles per hour. At the beginning of their journey, they have the strength to cover at least 25 feet in a single jump, and when they make their jumps, they can reach 6 feet in height.

Kangaroos are large, strong, powerful, formidable, dangerous, and tenacious animals. This breed usually remains in a herd as they like to be around their own. Instead, they always become fearful in the presence of other animals or humans.

They are native to Australia, where there are millions of kangaroos that live in forests. It is very common to see marsupials jumping from one side to the other in parks or lakes, but especially in the back or front yards of the houses. This breed of animal is very famous in its country. They have been used in logos of sports teams and renowned Australian companies.

Many people disagree with releasing these animals because they are dangerous (on certain occasions). In addition, many road accidents occur annually on the roads due to kangaroos that appear out of nowhere and stand in front of drivers. It is a more substantial reason to end this breed.

It is not recommended that you try to approach them or catch one since they are very fast and flee from you without giving you the opportunity to touch them. They even have a high index of danger since sometimes they misinterpret the slightest gesture as a threat to their pack or themselves.